Dovo Elitaire Shears 5.5″ | Model Number 240556 | Made in Solingen, Germany | ¡Discontinued and Out of Production!

By far the best seller out of all the Dovo scissors we’ve stocked for >10yrs, the Elitaire came in lengths from 4.5″ to 6″ and has hollow ground inner blade planes which are also honed on their immediate edge.   Sadly, in 2020 Dovo stopped own-production of scissors, so we still have a few and then that’ll be that.

The razor-sharp cutting edges have a ~35° cutting angle, which is more acute than the 45° standard in use for the vast majority of European shears. These two features get you an exceptionally-controlled cutting precision that’s more immediate in feel than a corrugated-edge model (such as the famous #20 ‘Catch Cut’) and lighter in feel than a model with hollow ground inner blade planes that don’t have the honed inner edge (#200 ‘Coupe Souple’ is the only example they still produce, but many models were made over the decades).

Do not try touching up that inner blade plane’s honed edge, or for that matter I’d not trust it to be re-honed anywhere but back in Germany with Dovo themselves (honing the external 35° blade edges is not, in this one opinion, beyond the scope of ye local shear-sharpening professed-professional, but as always with Dovo if you choose to have anyone but them hone anything they produce – and that includes you – you’re on your own from there on). While I’ve had great success fiddling with these scissors by intentionally dulling them (just that outer blade plane edge!) and then resharpening with a small, long, and thin coticule, officially you’re instructed to only do what Dovo tells you, good little boy or girl that you are, and don’t take the forbidden fruit being offered off the record here.  In any case, the steel’s terrific, and even in professional settings you should expect to enjoy several hundred (if not >1000) client-sessions with the shears before their sharpness becomes an issue.

The holes for your thumb and finger are lined with rubber, like almost every Dovo model.

The Elitaire also has Dovo’s “Micro Motion” feature, which is a PTFE-enabled spring-loaded pressure plate to hold the center screw. The Micro Motion gives the scissor’s action a more responsive feeling, and it seems easier to start of finish action, so that you can expect to be able to control the very end of the cutting edge for trimming.

This Dovo Elitaire shear comes with a 2-year guarantee against manufacturing defects, and you’ll need to contact Dovo to return to Germany for service if this arises.  We’ve never seen it occur (because they’re made as intended in the first place), but if your copy of Elitaire shears did turn out to have a defect in which Dovo (making hairdressing scissors prior the Cold War) agreed the item was defective, we’ll compensate you for your expenses of mailing to Germany (and Dovo will pay for your return shipping).

At this shop, however, 1) you will NEVER receive a shear used by anyone (let’s be honest, we all know that’s happening if you can return shears somewhere!), 2) you will NEVER be able to circumvent the policy to get your money back with the text that’s now assigned to the add-to-cart button itself, & 3) you’ll pay a lower price as you’re NEVER secretly subsidizing others’ fraud.  You’re getting an unused factory new Dovo Elitaire. 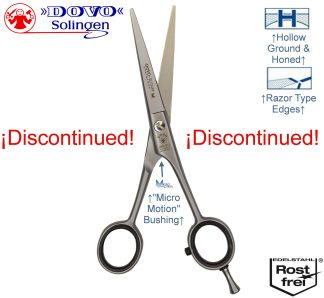