Respect this “EVO” for what it is, namely an Italian engineering group’s ~offended reaction to [mostly domestic Italian barbers] “it’s too mild!” caterwauling upon the prior non-“EVO” R48 version.   It’s hyper-aggressive, like a wide-open pivoting PAL if you’ve ever seen that crazy 1970s thing.   As such, we recommend using *blades* castigated as ‘mild’, & further (as no precise unified standard exists for DE blades width/thickness, only length & general hole position) to seek blades with nominal width (distance from one to other sharp side) toward the narrower spectrum.   If done, it can be a special 1-pass shaver with thick tallowy lathers, and no doubt a special 1-pass-ATG leg shaver for the ladies in the shower.   One never sells a Mühle R41 original model, even though it was clearly too aggressive for its own good – they respect and admire the adventurous engineering within.

The Focus R48 Dynamic EVO is similar to the old R48 Dynamic (no EVO), but now the bottom part of the head has two extra inward voids, and the top part of the head that comes off of the base has some protrusions which are new and extend for the first time beyond the plane, just like the registry pins.   It makes the loading and unloading foolproof and faster.   That was always the major complaint about this brilliant odd duck razor, along with it being “too mild”.   It remains brilliant – *if* you can get the hang of ‘pushing down from the top’ with the razor, which is the way some old cartridge systems pre-Mach3 favored but pretty much nothing else “modern” favoring its tension and fulcrum in this manner.

THEY HAVE ALSO (quite notably) INCREASED BLADE EXPOSURE VIA NEW REGISTRY POINTS FOR THE HEAD PINS/HOLES, TO MAKE THE R48 EVO MORE AGGRESSIVE, or less mild if you prefer, so its pass-for-pass efficiency is much higher.    Italian barbers had complained the original 48 too damn mild.

You can’t sit there with the new 48+ mowing the same spots like you could/can upon R51 and the now-deceased non-Evo version of the R48 (so often criticized for mild nature) .  In engineering, nothing’s free.   This razor will penalize you for overuse that way.   But it has a gas pedal, and it will get stuff to a high degree in the one try and keep at the angle it likes, but which I would no longer describe as mild; to me it feels like it’s doing its job and it intends to do it in one stop.  In the shower, I find this new 48 Evo a  one-pass marvel.   A magic hand mirror that did not fog would be a glorious thing, everything w/o running water thru it fogs, so I’m not mister 100% clean, but I can do really well for overall closeness w/ 48 Evo in the shower and a can of Proraso shook up.   In like one and a half minutes tops. 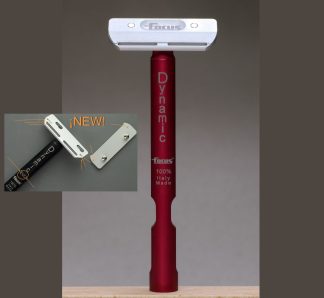