“The Belgian coticule of DEs”, nothing (new) like it on the planet!

The Focus “Tritok” are their new 3-piece classic style DE razors in either aluminum or stainless steel, with each model Tritok’s head, registry pins, and threaded screw obtained from a single block of aluminum/steel, laser-excavated until reduced to this size.

Focus produces 3 head geometries in their new Tritoks, and in their telling this FLAT R51 head’s “for a ‘soft shave'”, the CONCAVE R52 head “…for a little more aggressive shave”, and a SLANTED R53 head “…for a most aggressive shave”.     1x free opinion from many uses; concave #52s actually clearly the aggression king (and an aggro model it is indeed!), definitely not the slanted which is actually quite mild & comparable to this flatty #51.   Someone wanting a little more oomph than this could certainly go for the 53 and be happy, but if they’ve been using/liking other slanted head DEs and use the R53 hoping for similar I doubt think they’ll be happy; these need to be compared to themselves due their outrageously low setting.

The R51 Tritok Flat is certainly a razor unlike any I’ve used in my ~32yrs shaving, remarkable in ability to get close without biting.   The engineered cutting angle of blade to the skin’s just 25°, a tremendously low # among DEs not seen since prior the Cold War and providing that terrific mild affect.   As the head is ‘reversed’ in some sense from conventional DEs, however, you use a less steep “handle-to-floor angle” to position that 25°-angled-blade to the skin as the razor’s engineer intend it.   With most regular DEs you point the handle straight to Earth or close to it, and maybe even “earlier” than 6 o’clock to get its highest aggression.   Here, point the handle base around 7-8 o’clock versus you standing being 6 to 12.    The range of positions available for that beveled plane portion of head relative to skin which will actually allow actual cutting is so very narrow that the R15’s not easy to pick up for many experienced DE users, but if you think of your face as a 6 to 12 axis and a conventional DE like the Progress at 6 or even 5 o’clock with handle closer to skin, here the handle’s gotta be somewhere around 7 or you airball.

There’s many other mild razors in the marketplace; many cheap as chips.    They’re currently abundant.  Further, ultra-premium American and Canadian-made all-stainless-steel razors are also quite mild and much more intuitive in use (= more natural 5-to-6-o’clock way held vs the beard for experienced DE users).   What those lack that R51 possesses is combined ability to get a shave tremendously close (like hitting a rare home run with a forged straight razor)  without irritation in even the most difficult portions of beard at the price point offered to end consumers in conventional retailing; yes, those not named >$200 stainlesses give amazing soft/close, but not for seventy bucks.   You just can’t get a bad shave from this razor once you get its odd approach *if* you’re willing to put in the sink time making progressive reductions in the manner it will allow, and it is incredibly simple to use versus the R48 Dynamic Evo  (which takes significant market share vs this in the zero-sum game of those seeking best combined mild and close).   It just isn’t used the way you’d think, because the head’s flat.

I freely admit that while the engineering’s entirely different, a certain US-made all-stainless razor at very high price shaved me similarly in terms of closeness free of irritation and at ease of use thanks to much larger acceptable range of head to skin angle.    However, it’s >400% more costly, and while I didn’t get a bite in the half dozen pleasurable uses of that loaned thing, it isn’t inconceivable I could’ve.   Upon R51, I literally cannot imagine cutting myself, in fact I can’t imagine anyone doing so if that beveled plane’s flush to skin trailing the cutting edge.

The R51 wants pressure; see the picture, use the head cap plane itself to make the pressure!   Make sure the whole plane of that beveled bit is flush to skin, and push the plane into skin whilst move along beard like using a chisel – you won’t get bit, and beard’s slowly but surely be reduced.   Relather and approach from different angles, starting from behind the growth and then across it and then against it; this is a terrible 1-pass shaver.   The cutting edge of the razor blade just baaaarely extends beyond that plane created by the head-bevel-to-guard-bar.   It can’t ever get a lot at a time,  and it’s a clogger, too; hey, I’m reasonably confident Reese Witherspoon’s not winning any smelling sensitivity contests.  Not to worry, though, because due that minimal blade exposure and low cutting angle, repeated passes do not seem to offer any irritation risk!

No razor’s perfect, R51’s far from it.   Pass-for-pass efficiency is likely lower than anything else you can find.   Switching blades isn’t easy among 3pc DE razors; the not-really-named-by-name-but-alluded-to-above stainless models (with similar impressively-tight tolerances) weren’t nearly as hard to disassemble as this razor is for me each time, and I’ve done it enough times to have the sea legs underfoot…I’d like to say it’s just an aluminum versus stainless thing, but it ain’t, because an unnamed brilliant entry-level-price-and-higher-level-quality Canadian/American designer-retailer’s (Chinese-made? gotta be, but he don’t say) aluminum razors do not exhibit this trait.  It happens because of the tiny gaps.

The beautifully-polished handle could use some stippling or checkered grip or knobby bits; Italians like looks as much as function, you know.    I wouldn’t mind if it made some louder engine sounds like the Mühle R41 and especially the Merkur VISION.   Man,  can I whine inappropriately about anything, or what???  Sadly, some superfan buyers here primarily look for their reasons not to buy, and only upon checking off a whole such list will pull the trigger, so there they are, near as I can figure (this would explain why others do not individually photograph shaving brushes!)  #firstworldproblems

At the end of the day, R51’s the best new-production DE I’ve used yet, and it isn’t close; I’d take Proraso in the can + the 51 to a deserted island happily, without a mirror.   Smush that head into your face and chisel/planer blade along and you can’t miss (or more accurately can’t ever cut yourself), and keep at it long enough from various angles and it’s baby’s buttocks all over including the darn goatee zone and without a speck of irritation/weepers…few can ever say that, but the R51’s the only DE in the world that takes me longer than my str8rzr routine to use!

This razor clog badly with all thicker lather; we recommend going in the shower with a can or at the sink with the brush and fussy/wet/runny style latherfuels such as mister adorbs and Zartgefuehl.

Produced in various colors; this R51-6’s the black version, which goes ‘all black’ via its three pieces each getting the anodized touch…frankly, they should charge more for this one and it’s slant companion. 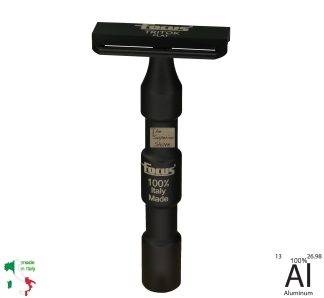