We found this tiny Italian cutler near Lake Cuomo at one of our recent trips to Italy’s tradeshows.   They’re specialized to scissors, in a village in Italy known exactly for this, and from what we’ve seen out of this village you can count on a few things from a Premana-manufactured scissor; a remarkably good cutting edge, grind, and steel temper, and a way of installing the center screw where it takes a notable bit more friction to start moving than to keep them in motion versus the Germans.  They just don’t have the Germans’ fluidity, and I think never will.   But the steel’s wholly terrific, as are the edges, in a way the Pakistani-made efforts (very skilled at grinding, but not so much at tempering procedures) can only dream of; the Henbor scissors we’ve handled have truly great cutting edges, in fact better than some others we deal with that you’ll know really well already.

This model is a 4.125″ beard-and-mustache-specific offering, with a Teflon coating applied before grinding the cutting edge.   Carbon rather than stainless steel chops down cost by roughly half, but being Teflon-coated (rather than oxidized like Dovo 43454) helps resist oxidation to the point you’ve got to be rather neglectful to have problems (don’t be that guy, though…keep it clean and dry after use and lightly oil it on occasion with a non-food oil such as mineral or clipper oil, though …in fact do this for your stainless scissors, toom, as the steel was not named stainnot, now, was it?).  It has two sharp edges with such extremely-fine serration as to be invisible to the naked eye; serrated enough to endure, but too fine for the ‘catch cut’ action of Dovo’s Moustache, which ironically some will characterize as “pulling” the hair…this one sure as sh*t ain’t gonna be called pulling hair by any sane person spinning around the sun but it will also go where you point it a bit quicker than the Dovo, and thus I will characterize it as something for those with skilled hands that just want the absolute best cutting edge all other factors be damned.  This has the best (sharpest) cutting edge in a moustache scissor that I have personally ever seen, and I’ve seen a lot!  If you want to steer/hold as you cut, though, you’ll need one of their other two options, or the Dovos or NTS’

To protect the blade tips and cutting edges, we would advise (of course we would) to pick up Dovo’s 389011 or 1111 sheath as well if you’re intending to travel with your little Henbor. 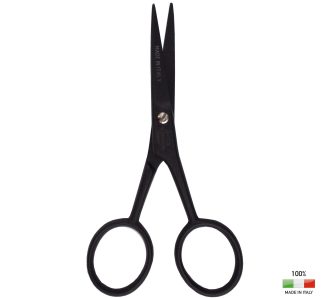 You're viewing: Henbor 4.125″ Beard and Mustache Scissors | Teflon-Coated Carbon Steel | Made in Italy $14.25
Add to cart