These handles are attractive and must be lightly oiled or waxed to look their radiant best.

This “Synthetic Silvertip Fiber Knot” model has a buffed conical olivewood handle with gold ringlet (ideal for the occasional application of olive oil, teak oil, Renaissance Wax, etc.), and a 20x52mm knot of fibers which look identical under microscope to the Mühle “Silvertip Fibres“ knots we were first shipped summer 2013… we hope the enormous price difference between this one and its “Silberspitz” sibling illustrates 1) just how good the silvertip badger hair is upon those “Silberspitz” models 2) just how profitable these faux-fiber brushes are for Mühle, at least once the R&D part’s over.   Hey, don’t be a little hater baby.   Hate the game, don’t hate the hustle.

As to which “generation” those summer-of-’13-shipped Mühle ~identical knots are or were, …who really knows?  If there really is such a thing, they won’t seem to say to us.   Whichever generation we received from Mühle (and I believe it to be the 2nd variation from what I saw), this hair seems identical, and my one test run displays all the same characteristics.  I’m certainly open to hearing an explanation by someone, adhering to the scientific method please, as to why these fibers are not the same.

The taxonomizing of synthetic fibers is a more lawless land than even the same of badger hair, for at least with badger hair everyone knew all the tricks and the basic rules.  Expect a knot that functions exceptionally in all ways for a fraction of the cost of genuine badger hair, though with the one caveat; Mühle or Kent or Omega or TSS or whomever, they can all get the fibermakers’ best stuff, but none of them can make a synthetic fiber expand and compress in its size in the same manner of genuine hair.  It can come close, indeed, but that one part always feels a little fake – the manner in which the knot loads with water and fuel and the manner in which the loaded knot moves about.    Hardly of any importance, though; to judge from the end lather and tip softness here is to be duly impressed indeed.

True to German form, even with something made by hand, the variances of knot/handle dimensions are so small as not to warrant measurement/display.  Olivewood OTOH varies, but at this price you’ll have to buy blind for now. 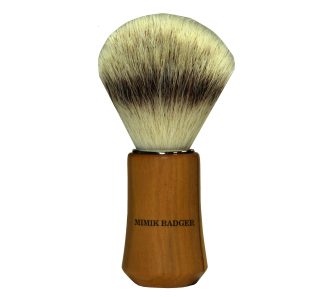