VP Leonhardy 800050 Premium 27x577mm Two Band Silvertip Badger Shaving Brush | Flat Type Canopy Style | Made in Germany ¡Discontinued! (THIS LISTING’S PRESENCE INDICATES WE *DO* HAVE STOCK UNTIL THE ADD-TO-CART BUTTON SAYS “OUT OF STOCK” AT WHICH TIME IT WILL BE DELETED)

Their 8000 Series brushes pair true 2-band silvertip hair (which some feel is the same level of quality as their terrific 3-band silvertip hair, but in fact cost much less per kilo than the 3-band, and VP’s hair exporter’s maintained a relationship for >40yrs so you know no funny business is going on…when brands charge more for 2-band they’re simply taking what a market bears rather than reflecting costs in hair).

So, how about 2-band?#160; Well, two-band hair has a base diameter ~50% thicker than 3-band silvertip, so when given equal weight of hair to a knot yields far fewer actual strands in a brush…but the hairs are remarkably springy versus three-band silvertip, and take in and give back water far better due the space which must exist between each strand top due to the large tapering in diameter from base to tip. 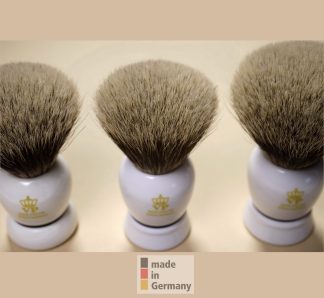 You're viewing: VP Leonhardy 800050 Premium 27x577mm Two Band Silvertip Badger Shaving Brush | Flat Type Canopy Style | Made in Germany ¡Discontinued! (THIS LISTING’S PRESENCE INDICATES WE *DO* HAVE STOCK UNTIL THE ADD-TO-CART BUTTON SAYS “OUT OF STOCK” AT WHICH TIME IT WILL BE DELETED) $171.00
Select options