Dovo Sharpening Pastes made in ‘green’ or ‘red’ designation are less aggressive in face feel than diamond pastes (also less sharp, but that’s not necessarily a bad thing, though; in many a shaver’s view a smidge less sharpness for a gain in smoothness is a great trade when dealing from the top).

ALL ABOUT PASTE SHARPENING

Abrasive pastes, used as supplements to honing, keep hones away from the razor for awhile.  If you’re starting with a professionally-honed straight razor, you can get by with just 2 sharpening pastes (and a surface for them) for a long time…perhaps used along with some chromium oxide for a smoother finish, you should be able to keep your razor’s edge fine enough to be satisfying for months and months of daily use if you’ve got an average beard.  Most will prefer chromium oxide finish, but some will still prefer the extra-sharp diamond paste finish.

Sharpening pastes have a primary limitation, which comes from using them with a stropping action (moving away from the edge) rather than a honing action (moving towards the edge).  They can’t increase the length of bevels, or decrease the cutting angle of an edge created by the intersections of said bevels.  They also can’t make wholesale edge restorations or corrections, of course.  See my rudimentary sketch below for a visual representation of this wording.  What good pastes do is restore proper smoothness to bevel faces and proper linearity to edges created by bevel faces.  If you’ve dinged or are trying to fix a neglected razor, get a hone(s).

Each particular paste needs a specifically-dedicated stropping surface.  Some like paddle strops, and they are more convenient and smaller.  Others like simple ‘bench strops’.  I prefer a hanging strop.  It needn’t be fancy; a taut scrap of leather or a chunk of flat balsa wood will certainly suffice.  But whatever you choose as your surface for paste stropping, mark it somehow so that you know which paste is to be re-applied to it.  For our sample size of exactly one average beard, 2 razors used daily with just regular stropping shouldn’t need to touch diamond pastes for at least a month, and bi-monthly touch-ups of just two dozen laps on each properly-coated surface should suffice.

All pastes work best when worked into the ‘body’ of the stropping surface, rather than just ‘floating’ upon it.  Try to get an even coating into the nap of the strop by pushing a few drops in with your fingers, and then try stropping in the usual way, starting with your coarsest paste and finishing with your finest paste.  With every change in grade, use a paper towel to completely remove any residues from the razor’s edge.  You don’t want coarser particles to touch a stropping surface designated for smaller particles.

A quiz is coming later, so please memorize every nuance of these 3 highly-technical drawings.  I do apologize for extremely poor illustrative skill…in trying to show the profile of a modern full hollow ground razor, I instead drew something akin to old ‘frameback’ razors, and perhaps arguably even something beyond our little shaving world.

Phase 1 (above):  A freshly-honed razor has a nice long bevel width which helps create a narrow cutting angle, with smooth and straight bevel faces and a nice and straight line representing the intersection of those bevel faces.

Phase 2 (above):  A razor which has dulled from use has had its bevel length reduced, its bevel faces made a bit more ragged/pockmarked, its bevel intersection point turned into a line instead of a point, and had its straight line representing the intersection of those bevel faces become more of a ragged ‘line’.

Phase 3 (above):  A razor refreshed from pastes hasn’t had its bevel length increased, but its bevel faces are indeed nice and smooth again.  Its bevels intersect at a point once again, but the angle at which those bevels meet has been changed.  The edge line is once again straight.

Though it takes quite a few cycles, eventually you’ll feel a slight difference in the comfort of the razor from the change of the intersection angle of the bevels.  Hit the hone at that point to get back to “phase 1”. 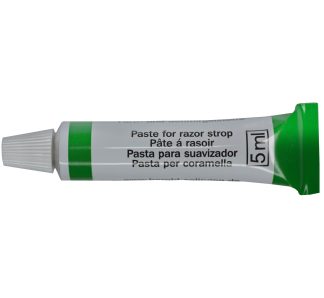