6/8 Version of the Venerable 5/8 Flagship

The Dovo 3680 Bergischer Lowe (= ‘mountain lion’) is the pinnacle of 6/8″ straight razors, with a terrifically hollowed grind, a shoulderless style, and a golden sculpted spine.  The scales are made from buffalo horn (farmed many decades in France).  Above all, each “BL” piece is individually unique, an expression of nature.

The Spanish point style (only shared among Dovo straight razors with the ‘Sunday Shaver’ and smaller 3580 version of this same razor) is terrific for getting under one’s nose, and for maintaining a mustache/goatee.

The grind is wafer thin and this particular Dovo straight razor is hollow ground by Dovo’s most senior master grinders.  This razor is substantially thinner than all 6/8″ Dovo round point models, indeed as physically thin as others designated as extra full hollow ground.

The Bergischer Lowe is a “shoulderless” razor, due to no secondary ridge being near the tang.  This is a rare feature on any 5/8″ razor, and it always involves extra skilled steps by the master grinders during production.  Shoulderless razors lack any ridge to avoid during stropping and honing like upon a normal razor with a shoulder.

Gold befitting of a beauty queen razor is dipped upon Berigscher Lowe’s upper portions as seen in the video below.

This business is wholly centered upon the sale of one hollow ground straight razor to one shaver one at a time; “1 str8rzr alone” is ~50% of all our orders.    You may elect to have your “BL” with factory edge or further honed by ‘TSS’, as only you see fit; there is not a right or wrong answer.    ‘TSS’ rather doubts the worth of debating this ‘Shave Ready’ concept today;  anyone can bandy that term about as if objective, meaningful information (like a sprinter’s time), but in fact it is completely subjective.

If you elect for the factory edge (= do nothing, no note needed @ checkout), you’ll receive your razor exactly as its manufacturers intended…pretty simple!  The factory seal’s been breached, yes (but obviously not on the ‘factory sealed’ option), and only so you could peruse from individual pictures of stock.

If you elect for The Superior Shave to further hone your razor  [plz add “note to vendor” @ checkout], this Dovo BL shall be honed in the manner taught in 2016 to The Superior Shave’s proprietor by two kind Solingen master grinders (whom did/do not work for Dovo, but do use similar 1840s grinders’ textbooks methods).    ¡See this exact BL being honed by TSS “only” {wink,  wink} here!  Regardless of their poor refinement  compared to further-honed ‘Honemeister’ edges on offer,  some physical elements of factory edges remain superior to most further honing attempts.   The Superior Shave will devote the extra time to your razor a dying industry cannot afford in overhead, without taking away the factory edge’s inherently advantaged geometric metrics.     We’re confident we offer the materially thinnest  further-honed-by-vendor edge available for purchase – you’ll need to try that to understand why it matters.     Please note: in the professional opinions of German and French razor grinders, a straight razor is not properly honed unless flush to the hone, without tape, so visual evidence of honing is unavoidable when honing is performed correctly according to its makers (we add Vaseline to your razor’s faces and use compatible honing fluid to help a little). 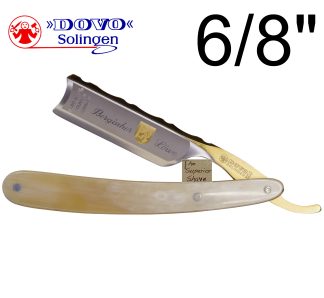