The Catch Cut scissors feature a cutting blade finely corrugated to allow good sharpness and extremely long-lasting edge performance.  In fact, many professionals use Catch Cut scissors for decades without re-sharpening!  The “catch and cut” signature action of the model allows simultaneous cutting and holding the hair, a feature that makes them favored by old-school barbers.  These have more friction during the run of the scissor and are not ideal for fine/thin hair, but nonetheless resonate with stylists enough to remain unchanged some sixty years on.

The Dovo Catch Cut has a 35° cutting angle, which was Dovo’s standard on their traditional models.

Same as the 16 but a Few Improvements

Essentially, the Dovo Catch Cut is identical to the #16 model, but with an improved center screw, 6.5″ option, and minor difference in the shape of the rings.

These shears come with a 2-year guarantee against manufacturing defects, and you’ll need to contact Dovo to return to Germany for service if this arises.  We’ve never seen it occur (because they’re made as intended in the first place), but if your copy of shears did turn out to have a defect in which Dovo (making hairdressing scissors prior the Cold War) agreed the item was defective, we’ll compensate you for your expenses of mailing to Germany (and Dovo will pay for your return shipping).

At this shop, however, 1) you will NEVER receive a shear used by anyone (let’s be honest, we all know that’s happening if you can return shears somewhere!), 2) you will NEVER be able to circumvent the policy to get your money back with the text that’s now assigned to the add-to-cart button itself, & 3) you’ll pay a lower price as you’re NEVER secretly subsidizing others’ fraud. 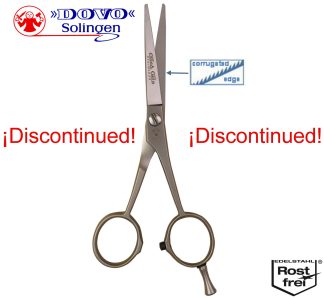