Do you know why we sell a comparative crapload of this hard milled, palm-based soap with unmistakably sophisticated scent of classic French talcum powder?   Because, practical or not (and the answer is obviously the latter, friend), one absolutely cannot deny this soap its charm.    That’s what it is; it is literally charming, like a smarmy piece of crap that’s so good at telling their lies that you don’t care that they’re lying to you.   The lie’s the pure devotion to functionality that shaving lather fuel should be, while the charm is the form factor, the presentation, the general lather character, and of course the scent.   Think peak Phil Hartman, the absolute charming-smarmy holy grail…Mr. Hartman had such tremendous ability to emote a combined sleazy lawyer’s confidence layered over Gil-from-Simpsons unease with whether or not any substantial Phil Hartman itself remained behind the troop of characters (precisely half of him’s worried that answer’s “no”…help the guy for *****sake!)

Shaped impractically for shave soap attack by any badger brush and milled enough that one can’t much negotiate its geometric form, Maître Savonitto (based in the sophisticated Provence province like so many, for that’s where terrific perfumeries lay) produces slightly thin great smelling and very wet and slippery lather.   It doesn’t dry out and doesn’t get thick as any American and always has that incredible odor.   I don’t know how to describe it, but if I start going on about it, you’ll think I’m crazy.   Let’s go there.

The odor’s strong, never overbearing, but always present.  It smells fake.  Like fake powder.  Talc powder combined with some few drops of expensive and sophisticated strong Grasse odors.  Is it a feminine or a masculine smell?  Because personally, to the age I associate with the masculine side of this smell, inherently, obediently, and subconsciously, I think-like Jerry Seinfeld does of the Lamborghini Miura-this is a tremendous perplexer in the feminine powderyness that you unmistakably pin to a distinguished older gentleman, like your daily-shaver dearly departed granddad.   Where’s the musk?  I don’t feel like I smell anything at all musky, to be frank, but one would swear this odor makes you feel a musk.  But there’s no musk there –  just straight under-powered excellent quality lavender with extremely strong French talcum powder smell at all levels of note-evaluation.   Oh, this odor has charm – not musty, just very cheap floral, but never cloyingly so.    A cheap thing, trying really really hard to be sophisticated, designed by someone with class selling to peasants.   Were a tremendously gifted French or English ‘nose’ parfumer addled the task of adding $x of very low investment very high end parfum oil to a soap that smells inherently as a urinal cake, I believe that sophisticated nose human could make that urinal cake smell like something great, for a moment somewhere in the foggy borders of top/heart/base.   Top notes could delight.   You don’t want to like that stupid urinal cake thingy, but damned if you don’t.   And that’s just like this nearly silly soap that will literally put a smile on your face every time you dare to use it.   Bless this older French lady, I love all her wares!   This is truly like the shaving-hobby equivalent of buying an experience at an amusement park, like living the thoughts of another era.  She’s awesome.   Scent and memories, if you’re a professional in student of the brain I’d appreciate an email about why the two are so inextricably intertwined.   That’s enough about this powdery odor.

Savonitto as a whole tries whenever possible to keep to purely French; the palm oil comes from abroad, (here coming from ecologically certified and well controlled plantations), but Savonitto fragrance oils come exclusively
from Grasse (nearby city famed for fragrance manufacture), and essential oils are chosen from French labs known for transparency and traceability.  Recycled paper used for labels | wrappers comes from France, and the poplar cartons come from French processors who use trees that are raised and slaughtered exclusively in France.

Savonitto’s a hardcore old school French outfit; they don’t do English, they don’t do packaging up your stuff, they make what they love and if you want to import some from the Western Hemisphere, sure, they’d love you to have it…but all the logistics are on you (they’ll tell you, only in French, how big your boxes are).   It is damn good French soap as a family of soap for the selection of powerful scents.

A certifiable lather bomb.  Prodigious producer.  Excellent stability and cushioning. Neither slippery nor hydrating as some highly-transient cold saponified options, but nonetheless nothing of ‘dry’ type lather a la Trumpers’ creams for contrary example…here you get much English cream volume with additional ‘organic’ French charm that Brits’ offerings (more what one calls ‘inert’ lather style) seemingly lack.   This soap has a lot in common with the Berthon in terms of functionality though the former is much more stable.

The physical hard milled disc has odd silly dimensions for any shaving soap.  Problem is they set up everything for all the other non-shaving soaps in the poplar like the rose and sea-smelling one and donkey milk, a ~2.5″ wide disc a bit thicker than 1″ that’s got little ~1.25″ plateaus on each end…you can put this easily in to a shaving mug, or grate it down and malleate in to your favorite bowl with a really thick chopper or dough cutter but flakes will come off everywhere and you’ll be stuck malleating.

I suspect this is the lowest cost per session soap we offer given how milled and without high buy-in rate. 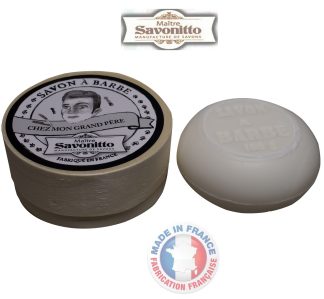