Made by hand (and uniquely so), the Thiers-Issard brand is, in this one opinion, the most hollow ground and flexible razor left in production today.  They’ve produced straight razors for nearly 100 years in Thiers, France, with traditional methods confined to this most special of nations.

This listing is for the “1920 Spécial 1ere Barbe”, a smaller 4/8″ half-hollow ground model made to emulate what an early 20th c.  French barber might prefer to use on their clients.   Always produced with a round head, the “1920 Special” is available with several different handle options, here produced with the cheeky ‘Stork on the Roof‘ adorable plastic thing.  Anti-slip file jimps are present upon the underside of the tang for grip.  Both sides of the razor are satin-matte polished (this is the “275” in Thiers-Issard speak).  A black lambskin pouch is included with the razor.

If you elect for The Superior Shave to further hone your razor, your razor will be delivered to you  Guaranteed  Shave Ready!   Observe this precise model of razor being honed by TSS here and here!   The Superior Shave hones via a method best coined (by the old Thiers-Issard director) as “the opposite of tape“ where the hones’ geometries are catered to performance of the razor and to no other concern. 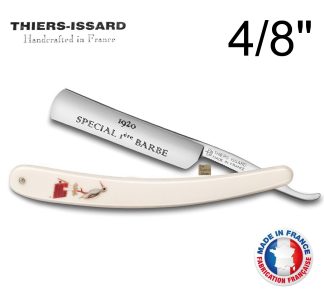