“Le Grelot” was a historic trademark originating from a deceased operations Thiers cutler, and at some point the ownership of Thiers-Issard purchased the Grelot trademark along with a cache of ‘blanks’ of vintage forging of unknown time or recipe.   Those original forged cylinders are long gone and the name is just kept for posterity, though they do use a particular die set (from modern forging), slightly thicker than the profile of the Evide Sonnant Extra et al and rather emulates the shape of those original Grelots.    All the same processes are occurring to the two distinct profiles of steel cylinder/formulation, and in these cases inevitably some blanks are better at getting super concave than others.   So you can think of the Grelot today as as hollow as any Solingen standard full hollow ground, but not as hollow as the Evide Sonnant Extra, 188 ____, 889 ____, etc.

The Le Grelot 6/8″ size model is supplied with cheeky “historical” packaging, and with handles made of bocote wood which comes from a ‘wood farm’ in Spain but is thereafter entirely produced in France by hand.  TI doesn’t sell scales-alone anymore so if you want original quality and the variations of the handle, you have to pay TI to play…and they do an absolutely amazing job, I must say. 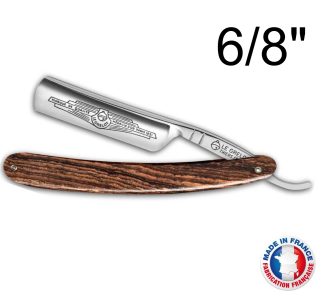