The “1196”, with its “Evide Sonnant Extra” motif, is the basic model round point razor (offered in either 5/8″ or 6/8″) in their tremendously-thin extra hollow grind, this razor given the basic satin polish.    This 6/8″ size razor’s supplied with a free basic leather sheath/pouch, also made in France.

The scales here are Macassar ebony wood, and no more offers from Thiers-Issard to sell scales-alone because they want to sell their lovelies together, I guess to push more steel.

This business is wholly centered upon the sale of one hollow ground straight razor to one shaver one at a time; “1 str8rzr alone” is ~50% of all our orders.    You may elect to have your Thiers-Issard with its factory edge (which we think is exceptional, but that’s just one subjective opinion, and opinions vary) or further honed by ‘TSS’, as only you see fit; there is not a right or wrong answer.    ‘TSS’ rather doubts the worth of debating this ‘Shave Ready’ concept today;  anyone can bandy that term about as if objective, meaningful information (like a sprinter’s time), but in fact it is completely subjective.

If you elect for The Superior Shave to further hone your razor, this TI shall be honed in the manner taught in 2016 to The Superior Shave’s proprietor by two kind Solingen master grinders (whom did/do not work for Dovo, but do use similar 1840s grinders’ textbooks methods).    Regardless of their poor refinement  compared to further-honed ‘Honemeister’ edges on offer,  some physical elements of factory edges remain superior to most further honing attempts.   The Superior Shave will devote the extra time to your razor a dying industry cannot afford in overhead, without taking away the factory edge’s inherently advantaged geometric metrics.     We’re confident we offer the materially thinnest  further-honed-by-vendor edge available for purchase – you’ll need to try that to understand why it matters.     Please note: in the professional opinions of German and French razor grinders, a straight razor is not properly honed unless flush to the hone, without tape, so visual evidence of honing is unavoidable when honing is performed correctly according to its makers (we add Vaseline to your razor’s faces and use compatible honing fluid to help a little). 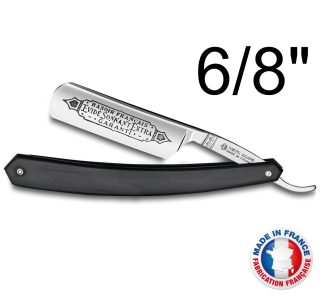