This is an extra hollow ground 6/8″ of their basic form but with decorations on both the tang and the show side which are dedicated to this historic nod, Médaille D’or Exposition Alger 1921.    Someone won a medal in 1921, perhaps they were curlers known for their beloved French brooms revered for their sweeping?

Desert ironwood makes up the scales, and at The Superior Shave this particular timber holds some special historic appeal as it was the scales of our very first custom razor long since gone to time.   These pieces are better than what we had because they posses more of that ‘unpolisheable’ recurrent pattern to the touch, no doubt about that, but we wouldn’t have gotten the deal that we did if we didn’t make that concession.    Judging in person for my little razor NFL drafts and doing gravity models as I like to do to balance desires/price, the ‘squiggliest’ ones are consistently the lookers to me, and because of this there is indeed one specimen on two images which pops with the most of that advertised minimum of the attribute that I’d assume it goes first as the bluest chip of stocks, but I don’t want to alter the prices on such otherwise drab imagery to reveal which is which.  It has always been a nightmare to photograph except one by one with very controlled lighting.  It’s a beautiful timber by any standard, and an all-American one to boot. 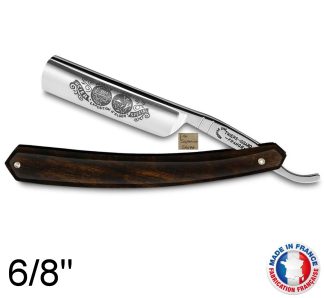