Give a Tip to The Superior Shave; Always Expected, Never Appreciated | $756.37 DONATED SINCE MAR. 10 ’21 DUE OUR (INSANE) SUPERFANS | C Yer Workproduct Lost @ youtu.be/r8xGB-8GRiw

Always Expected, Never Appreciated!   Here There’s a Record of Yer Action (It Isn’t Like Seinfeld w/ the Calzone and George Not Getting Credit)

Does this site make you laugh?   Has it caused you to learn about relationships or other useless things?  If it has, we are not square – you owe me.   That’s separate from any buying you’re doing here – this is just between us.

If it does not make you laugh, you’re already a wanker, so you don’t need to do anything more but enjoy the rest of your wanker days ahead.

Anyways, assuming you’ve laughed, it is time to tip, or else you’re permanently referred to mentally here as a just another cheapskate bastard…plenty of those out there, wanker, go join your little club!   From now on, every order that does NOT include this SKU = see above.   And we’ve put it in every single category and will include it as a recommended accessory to all SKUs, too, so take that you-didn’t-see-it schtick and sell it somewhere else.   F*cker.

We now offer levels of tipping, including level 4 and 5 where you can get either a Happy Birthday shoutout for the entity of your choice in a future video seen by potentially hundreds, or the ultimate “Level 5” where I’ll do an entire random bit based on you and your family that’s wholly intended to offend because ‘safe’ jokes aren’t funny and the last truly open to attack class of people besides the poor atheists are the even poorer comedians!

One of my two children (actually I believe it is the one that is less artistically inclined, and supremely-annoyingly referred to repeatedly “She’s so pretty!” {what, r they saying the other one isn’t?}) drew this cup w/ Rick & Morty motif and wanted me to put it next to the cash register back when we had a retail bricks and mortar store.    I did not do so, but I will do so now, digitally, and hope for the best.

Please note that within the constructs of a milquetoast forty-eight-year-old provider for four dependents, your donations will be set aside and intentionally spent as foolishly as possible, overwhelmingly likely in the purchase and consumption of mind-altering concepts such as alcohol or extremely high quality serial-story-type fresh digital content, of which my latest Jarrodism ( = any phrase I made up such as “cookie hawk” {v., to badger someone for something you want or invade their personal space}, these occur by nature and are often adopted by my small circle of friends/relatives/associates to permeate Earth… in fact, true story, because my Jarrodisms are so common, my great college roommie actually assumed I created the phrase ’24/7′ when he’d heard me say it ~1993, every time I hear it in adverts or see it on a sign I chuckle) properly designates these as “mind coke”, because you’re just buying thoughts/feelings (actual cocaine’s more expensive according to all the movies and whatnot) and much like the real thing you might choose to lie on its behalf.

As I type, I must now confess that after just 2wks of the dumbass e-tip jar we’re sitting pretty at +$94.14.   So, I shall now spend that $ walking 500m or so and fetching a new bottle of Macallan 12 Sherry Oak and doing a blindfolded video with it and a lazy Susan and my last bit of 2017 Macallan 18 Sherry Oak…I’m OK w/ messing up picking who’s who on a 400% price variance within one distillery in the name of content, but heaven help me if while blindfolded I bonk in to one of those little tulip glasses with my hands and spill…better go in to that one sober just to be safe, which, here at 17:11 GMT 03.23.2021 I do happen to miserably be.   Let’s go change that, all thanks to you (assuming you’re not a wanker cheapskate bastard reading that while stalking this dumb site and slowing down its bandwidth, why don’t you buy something not from the sale rack already?) 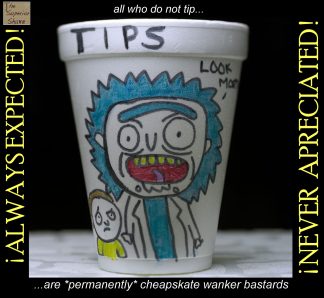