These new-in-2022 production double edge razor blades have been ‘ground to the finest perfection in Germany.   They are also quite expensive; hard to imagine a higher price per unit at the directly-from-the-producer level, but then most locations where double edge razor blades are produced feature reduced standards of living and worker wages than in Germany.   No doubt these will be entirely unique and polarizing blades!

Below is the text of their press release which accompanied the reintroduction of own-brand PTFE-enhanced double edge razor blades.

We are proud to have been producing in Germany for over 100 years. Furthermore, it is our commitment to pay fair wages, to protect the environment already during production and through short supply chains, as well as to offer young people jobs with us in Solingen.

Following our motto: “YOUR FACE DESERVES PERFECTION”, we have the highest standards in manufacturing and quality control:

With our razor blades you have a durability of about 6-8 shaves until the sharpness decreases. Thus, you need only need 4-5 blades per month when shaving daily.

Made in Germany.    I do not know if that means made in Solingen at their own factory, made in Solingen by another factory, or just somewhere in Germany.   Twelve years ago, I did in fact witness with my own two eyes blades being produced in their Solingen factory by a 1960s-Swiss-make Dr. Seuss-looking machine which was set up for corn blades but certainly appeared as if it could also produce DE blades (that sure is easy to say when you are not the producer, no?)

Anyway, back then their Merkur-branded DE blades were produced by a company which was since bought by the people that bring you Harry’s razors, whom quickly determined that the value in the factory did not lie in OEM-productions of a non-proprietary item and instead in the classic printer-is-cheap-and-ink-is-a-ripoff back end long play strategy.   So Harry’s guys said “thanks, but no thanks” to the continued production of various brands of German-made DE blades, and after this the new Dovo ownership had to source DE production for their *Merkur* blades in the Czech Republic.  I haven’t tried the CZ-made Merkur blades, but did try another brand from that same factory and liked them quite a bit.   In any case, these blades are not the same thing at all. 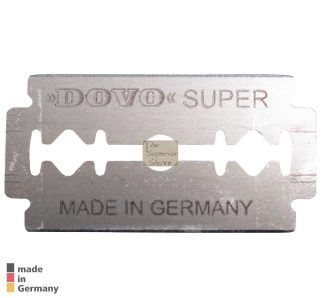