The 889 Wolf and Sheep is an ultra premium model Thiers-Issard razor,  featuring the traditional and highly skilled French point in a 6/8″ size that has a tremendously thin extra hollow grind, and is supplied with a tan-colored soft vegetable-tanned leather sheath.

Scales are ram’s horn and will of course each be quite individual, but thankfully here at TSS you get to pick your piece from pictures of the actual stock (choke on that, Amazon buyers!)   We have found, over the course of eleven plus years doing it this way, that it became all too easy to predict which piece would sell first when all were priced identically – this indicates demand is unequal once you make individual pics, and that those wanting the obvious hotties in the club should pay more, while those accepting the poor dregs of society should pay less.

This stock is exceptionally well produced and emblematic of the premium razor on the world stage that Thiers-Issard absolutely deserves to be designated.

The laser-engraved inlay mentions “Sheffield Silver Steel”, but that doesn’t mean that this physical blank of raw steel necessarily came from Sheffield, England – what it means is that the recipe, the formulation of the steel, originated there.   It does not matter from the cheapest to the most costly place where raw untempered steel comes from; what matters is its formulation, and of course the critical bits of how it is forged, tempered, and ground.  Cheap POS Pakistani razors on the bad vendor sites love to tout “Japanese steel” to fool the naive buyers,  but they’re only (truthfully) referring to the country that first originated the recipe…you can rest assured the physical steel itself did not come from Japan, because there’s no reason to add that overhead.

The pinning on the horn’s nice and tight, but *always be mindful with horn bone or timber* to guide your razor’s toe in to the scales by sight and careful guidance each and every time the action is performed.   Bone, timber, and especially horn love to move, and that’s a fact ordained by nature that cannot be legislated or manufactured away! 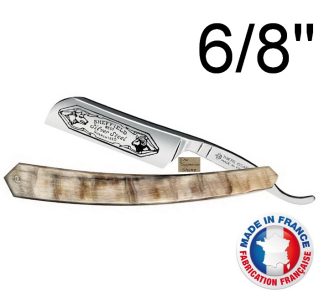