“Le Grelot” was a historic trademark originating from a deceased operations Thiers cutler, and at some point the ownership of Thiers-Issard purchased the Grelot trademark along with a cache of ‘blanks’ of vintage forging of unknown time or recipe.   Those original forged cylinders are long gone and the name is kept for posterity, though they do use a particular die set (from modern forging) which is slightly thicker than the profile of the Evide Sonnant Extra et al and rather emulates the shape of those original Grelots.    All the same processes are occurring to the two distinct profiles of steel cylinder/formulation, and in these cases inevitably some blanks are better at getting super concave than others.   So you can think of the Grelot today as as hollow as any Solingen standard full hollow ground, but not as hollow as the Evide Sonnant Extra, 188 ____, 889 ____, etc.

The Le Grelot 6/8″ size model is supplied with a cheeky “historical” plastic coffin, and with handles made of snakewood which comes from a ‘wood farm’ in Spain but is thereafter entirely produced in France by hand…apparently from the looks of our first two batches, the French are superior to the Germans at selecting and producing these snakewood scales, and because of this we’ll have our straight razor libido in a tizzy to see their capacities for Desert Ironwood.   We did, incidentally, ask Thiers to provide scales-only, as they had at one time for the original ownership of Classic Shaving…they said thanks, but no thanks.   #blessthefrench

If you elect for The Superior Shave to further hone your razor  [plz add “note to vendor” @ checkout], this TI shall be honed in the manner taught in 2016 to The Superior Shave’s proprietor by two kind Solingen master grinders (whom did/do not work for Dovo, but do use similar 1840s grinders’ textbooks methods).    Observe this precise model Le Grelot being honed in stunning 1080p here!   Regardless of their poor refinement  compared to further-honed ‘Honemeister’ edges on offer,  some physical elements of factory edges remain superior to most further honing attempts.   The Superior Shave will devote the extra time to your razor a dying industry cannot afford in overhead, without taking away the factory edge’s inherently advantaged geometric metrics.     We’re confident we offer the materially thinnest  further-honed-by-vendor edge available for purchase – you’ll need to try that to understand why it matters.     Please note: in the professional opinions of German and French razor grinders, a straight razor is not properly honed unless flush to the hone, without tape, so visual evidence of honing is unavoidable when honing is performed correctly according to its makers (we add Vaseline to your razor’s faces and use compatible honing fluid to help a little). 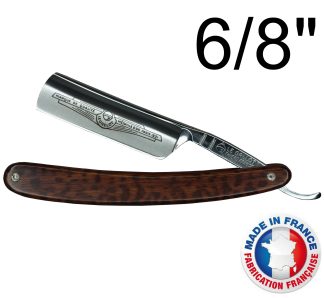