The “1196”, with its “Evide Sonnant Extra” motif, is the basic model round point razor (offered in either 5/8″ or 6/8″) in their tremendously-thin extra hollow grind, the ‘275’ further denoting both sides given the basic satin polish.   This 6/8″ size razor’s supplied with a free basic leather sheath/pouch, also made in France.    The scales of the razor here are olivewood, and no more offers from Thiers-Issard to sell scales-alone because they want to sell their lovelies together, presumably to push through more purchased steel.   File jimps are present on the bottom of the tang, and a notch is present on the top.  The 6/8″ Evide Sonnant Extra in olivewood scales weighs approximate forty-six grams. 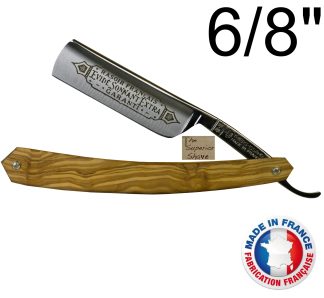