Choose Yours from Images of our Actual Stock!

The 7000 Series are VP Leonhardy’s flagships with handmade handles; the pride of a >120yrs German brushmaker. It is my opinion that we’ve never before offered >25mm knots with better combined density and flow-through. The hairs take upon a gold hue when wet that I cannot recall seeing before in thousands of brushes we’ve sold and hundreds used, so perhaps they are using a different supplier in China for their hair than the rest? I don’t know about that part, nor do I suspect it means much, but it was interesting to witness.

The knots are unabashedly big, tall, and proud, but don’t allow stats on paper to make you believe they’re floppy or difficult to control; have you ever used a Plisson “HMW”, with their very tall lofts? They might be springy, but floppy’s not the right word for them, at least not for most; go play with a Vulfix 377 silvertip or Kent BK12 if you want to know what floppy can be (to most). There is more to a knot’s manner than diameter and height; density, depth of setting, hair type, and – the crucial element I rarely see mentioned on internet forums – the total relief of the knot head all have influence. The VP knots’ density and large ‘relief’ (variance in top of knot’s loft from lowest hairs to those in center furthest from handle, in fact the most I’ve ever seen on the 700050) render it to me and many others more controllable than should be possible, like a big stiff sponge or perhaps a loofah? Check out the video link above face-lathering with the #40 and watch the knot as it moves around and come up with a description that you like and email it…the dictator’s always open to suggestions here! In the end, though, do remember that all these terms like “floppy”, “stiff”, and “scrubby” are entirely subjective terms, rather than objective terms; there is nobody who can be “wrong” for describing any brush with any of the terms, because there is no such thing as being “right”, there is only opinion. I find Simpsons’ Classic #2 as about the stiffest and scrubbiest little brush I’ve ever put to beard, but if someone else castigates it to the “floppy” crew, he’s not wrong any more than I am right if I use what he deems stiff and scrubby and decree it too floppy for me. Having said all that, it is hard for me to understand how someone can call these floppy knots, as the two metrics I use for that description are absent here to me…those two metrics are 1) having some difficulty controlling the lathered-up knot’s position on the face because it so easily moves aside whence meeting beard 2) having a difficult time determining when your hand is moving, and where is its position, while the knot is on the beard….ie, a “lag time” between moving your hand and knowing from the knot tips that the handle’s on the move. I’d certainly assign those metrics as present on the 7008*0 “creampuff” models, but not on 7000*0s. Frankly I don’t find #700040 any harder to control on my face than a Simpsons Chubby #3-equally enormous (in actual use, no matter what’s written on paper, 700050’s certainly bigger than CH3), but much softer.

Buy these models for their knots, if not their handles. The spun polyester feels as solid in the hand as an S-Class sedan does under the arse, but they’re painted (rather than solidly colored throughout such as Simpsons/Vulfix/etc./etc.), and painted individually at that. Charming in some manner, sure. But painting doesn’t compare with Simpsons to me for coolness; they’re the kings of cool handles, and debating it is a loser’s proposition. Don’t get me wrong, the handle feels terrific in the hands; it just isn’t the primary reason to buy, while when the rare “Somerset-era rod stock” Simpsons comes down the pike to us you’ll have a hard time convincing me that the buyers of those aren’t doing so first and formost to brushturbate with their handles. Using these should be exciting for you due to their incredibly special knots, and as a blind man you’ll almost certainly adore the handles, for they do have a unique sensation in the hand. Look at the individual pictures and judge the handiwork yourself; it is more than a little bit silly that these would be the first brushes individually photographed here at TSS for their HANDLES rather than for their knots! 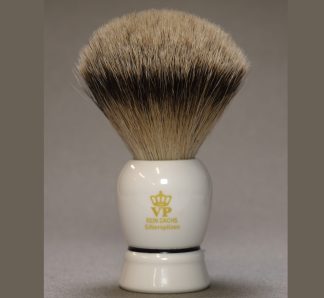